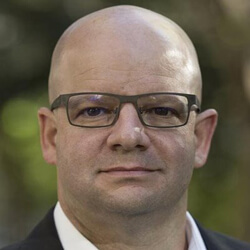 Ilja is a former journalist and business news editor who has spent the last 17 years in various investor relations, communication and strategic development roles, primarily in the mining industry.  Ilja started his career in financial journalism at Business Day, where he worked as a market reporter (in print, radio and tv) mining editor and Companies and Markets editor.

While completing his MBA (Finance) at GIBS Business School, Ilja was made a Partner at PR consultancy Brunswick. This was followed by a five-year tenure as Head of Investor Relations and Communications (a position he founded and built) and subsequently Strategic Development Officer at DRDGold, while holding non-executive board positions in Emperor Mines (ASX listed), Goldmoney.com and Rand Refinery Limited.

Following a year as Vice-President: Investor Relations for NASDAQ listed IT company Net 1 UEPS Technologies (again, a new position that needed developing), Ilja formed his own consultancy, Lucidity, assisting mainly junior mining companies with their communication and financing needs. His then client, Gold One International approached him to take up a full-time position with the company as Vice President Corporate Affairs and Investor Relations Manager.

Following the take-over of Gold One by a Chinese Consortium (Baiyin Non-Ferrous Group/China-Africa Development Fund/Long March Capital), Ilja joined Elemental Minerals in January 2012 developing the IR and communication position while also assisting with corporate development and financing in both the debt and equity markets.

Together with his CEO at Elemental, Ilja co-founded Madini Minerals in the middle of 2013 and from November 2014 dedicated his time fully to the new venture. Ilja was also Regional Director for London based CMi2i, a company that specialises in Capital Markets Intelligence and Proxy Solicitation services.

An opportunity to provide high level, in depth corporate advise not generally available in South Africa,  he co-founded Fetcher Advisory, a full-service advisory business focusing on complex communication and capital market needs with a former journalism colleague. He has been involved in major company reorganisations and corporate governance clean-ups as well as having advised on shareholding structures and proxy events.

Ilja’s commercial focus has been on both the equity and debt markets and assessing those in line with his corporate development responsibilities and evaluate the strategic opportunities afforded to the companies he has worked for.

Ilja has worked primarily in emerging markets with a strong focus on Africa, while he has capital markets experience in various jurisdictions including ASX, JSE, LSE, NYSE, NASDAQ, TSX and the SEHK.

Ilja has spoken at numerous emerging market and investor conferences and has dealt with both buy-side and sell-side investors in all major capital market destinations around the world and has played an active and front-line role in being the spokesperson for his employers.

02/04/2020 10:20 02/04/2020 10:30 Feedback Judging Panel Eddie Grieve is the General Manager of Listings and Issuer Services at the Australian
Securities Exchange (ASX). He has had extensive experience in all aspects of capital
markets over a period of more than 30 years.
Eddie has served in a number of senior roles at ASX. He has been closely involved in
major floats and primary equity market raisings throughout his career and in his current
role at ASX he is responsible for growing the ASX listing business and developing and
promoting access to the ASX equity capital market.
Eddie frequently presents on IPO and listing issues and works closely with companies
considering listing on ASX to help them achieve their objectives. CTICC
Venue