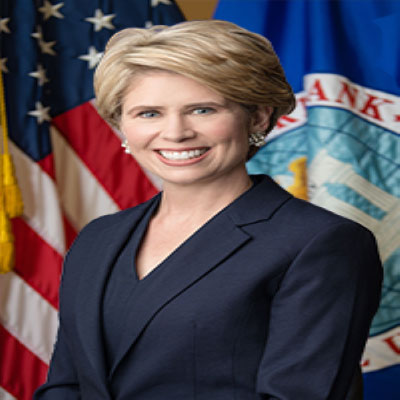 Kimberly A. Reed was sworn in as President and Chairman of the Board of Directors of the Export-Import Bank of the United States (EXIM) on May 9, 2019. She is the first woman and first West Virginian to lead EXIM.

Reed has spent her 20-plus-year career working in the public and private sectors and has led efforts focused on American job creation, trade, economic development, food and agriculture, and government reform.

Reed most recently served as President of the International Food Information Council (IFIC) Foundation where she collaborated with the U.S. Departments of Agriculture and State to increase acceptance of U.S. exports in emerging market countries. At the U.S. Department of the Treasury, Reed headed the Community Development Financial Institutions Fund, where she oversaw the award of $4 billion in tax credits, loans, and grants to financial institutions and economic development groups investing in distressed communities across the nation. She also served as Senior Advisor to U.S. Treasury Secretaries John Snow and Henry Paulson. As counsel to three committees in the U.S. House of Representatives—Ways and Means, Government Reform and Oversight, and Education and the Workforce Committees—she focused on oversight and reform of federal agencies. Reed was also Vice President for Financial Markets Policy Relations at Lehman Brothers in New York.

Recognized as one of the "100 Women Leaders in STEM,” Reed previously served as a Member of the Boards of the Alzheimer’s Association, Alzheimer’s Impact Movement, American Swiss Foundation, National Coalition for Food and Agriculture Research, Tax Coalition, and West Virginia Wesleyan College. She was the first woman elected as Chair of the Republican National Lawyers Association.

Originally from Buckhannon, West Virginia, Reed earned her J.D. from West Virginia University College of Law and B.S. from West Virginia Wesleyan College. She is a Certified Association Executive (CAE), earned a Professional Certificate in Finance from the New York Institute of Finance, and has spent time in more than one hundred countries.