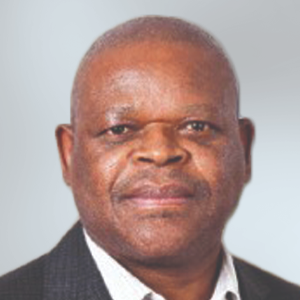 Chair of the Advisory Board Investing in African Mining Indaba

Mr. Frans Msokoli Baleni serves as the Deputy Chairperson on the Board of the Development Bank of Southern Africa. Mr. Baleni is a Member of the Council at the University of Johannesburg, Non-Executive Director with PetroSA, Chairman of the Board at ADC Cables, and board director with F11 Management Consulting. As a board member, Mr Baleni brings sound commercial, risk, governance and compliance skills together with his expertise in mining, health and safety, government relations, education and training, energy sector, stakeholder management and collective bargaining processes.

Mr Frans Baleni is the past General Secretary of the National Union of Mineworkers, South Africa’s largest trade Union, a role he has held since 2006. He started his career in the mining industry in 1979 and a year later was elected a Shop Steward. In 1988, he became Branch Chairman at the Western Holdings Mine in Welkom. Frans then joined the National Union of Mineworkers (NUM’s) arm and held a variety of posts until his election in 2006 as General Secretary.

Mr. Baleni holds a Certificate in Human Resources Management (UNISA) and Building on Talent Programme (Luasanne, Switzerland) (IMD). Mr. Baleni has a BA in Social Science Development Studies from University of Johannesburg (2006) and a Diploma in Political Science and Trade Unionism from Whitehall College, Dublin (1990).