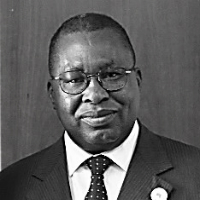 Albert Mudenda Muchanga was elected African Union Commissioner for Trade and Industry in January, 2017 for a four year term. He took up his post on 15th March, 2017.

He previously worked in the Zambian Civil Service at home and abroad, including the Secretariat of the Southern African Development Community. He works with ease at technical, professional, leadership and political levels.

Albert Mudenda Muchanga brings to the Department of Trade and Industry, experience in the promotion of inter-governmental relations, engagement with the private sector, as well as promotion of regional integration and cooperation as levers of sustainable development, among other key areas that are critical to the effective execution of his current duties.

Albert Mudenda Muchanga has a passion for creating value from all his official engagements. He also believes that continuously developing people and institutions is crucial to creating value on a sustainable basis.